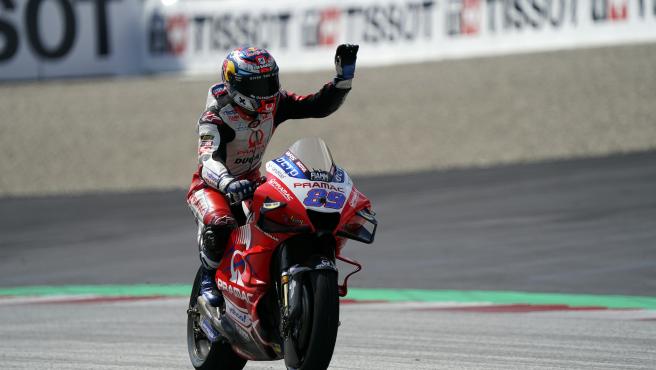 The Spanish pilot Jorge Martin (Ducati) won pole position this Saturday, the second in a row, for the race of MotoGP of the Austrian Grand Prix, eleventh round of the Motorcycle World Championship, after completing a fantastic last lap of record in which he snatched the privileged position from the French Fabio Quartararo (Yamaha).

The Madrilenian, ‘poleman’ and winner last Sunday at the Styrian Grand Prix, again demonstrated his dominance at the Red Bull Ring to seal his third pole of the year, the 24th of his career, and become the third rider in history on pole after going through Q1. With this, he will lead a front row in which he will be accompanied by Quartararo and the Italian Francesco ‘Pecco’ Bagnaia (Ducati).

“I’m freaking out. I have a lot of pain in my knee from falling. I had a good time, but I had a problem with the brakes. It was a lap, even though I made a mistake on the penultimate corner. I feel very comfortable and I am looking forward to starting the race. I’m living a dream, “he acknowledged to DAZN after the qualifying session.

All in a day that began with difficulties for the San Sebastián de los Reyes, who had to go through Q1. Along with the Portuguese Miguel Oliveira (KTM) achieved one of the last tickets for Q2, while Quartararo began sending with a 1: 22.677 that put him at the top of the times table.

‘El Diablo’, sole representative of Monster Energy Yamaha MotoGP for the sanction of Maverick Viñales for his driving in the Styrian Grand Prix, thus breaking the circuit record set on Friday by his compatriot Johann zarco (Ducati), and it seemed that nobody would be able to surpass him. However, Martín, like last weekend, showed his skills on the Spielberg track to climb to first place with a spectacular 1: 22.643.

In Moto2, the British Sam lowes (Kalex) was the fastest and took his fourth pole of the year, number 15 in the category, ahead of the second in the championship, the Spanish Raul Fernandez (Kalex), and the Japanese Ai Ogura (Kalex).

In the final qualifying session on Saturday at Spielberg, the World Cup leader, the Australian Remy gardner (Kalex), set the first benchmark time, which Ogura managed to beat after the equator with a lap of 1: 28.802.

Moto3: Fenati takes pole ahead of Alcoba; Acosta will come out seventh

The Italian pilot Roman Fenati (Husqvarna) has achieved pole position for the Moto3 race of the Austrian Grand Prix, in a front row in which he will accompany him Jeremy Alcoba (Honda), while the championship leader, Pedro Acosta (KTM), will start seventh in search of his second consecutive victory at the Austrian track.

Breaking the absolute pole record signed by Joan Mir in 2016, Fenati took his fifth first starting position of his career, heading a first line where the Japanese will also be Tatsuki suzuki (Honda) and Alcoba, second and third respectively. “Now I am learning to be a pilot on Saturdays, I have to improve on Sundays. I’m super happy“, declared the Catalan to DAZN.