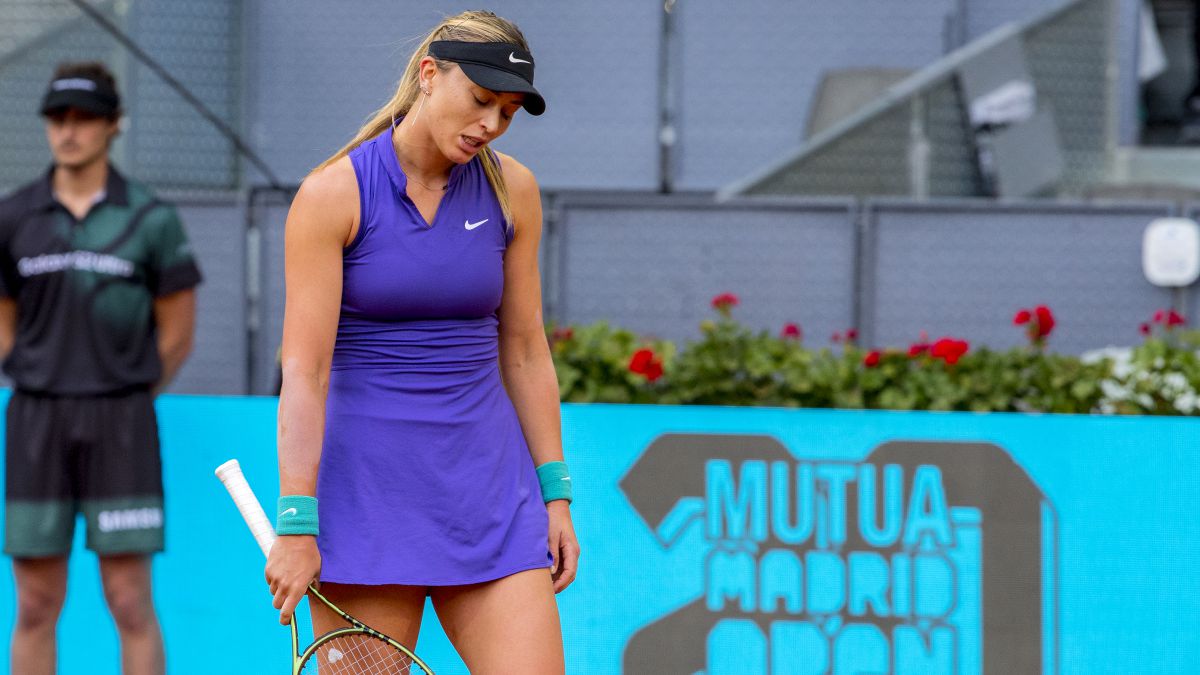 With glassy eyes, on the verge of tears. This is how Paula Badosa said goodbye to the Mutua Madrid Open this Friday, in the second round of a tournament in which she was a semifinalist last year. Lose 325 points and number two in the world. The culprit for that position being so ephemeral (he came to it last Monday) was an intractable Simona Halep, who won 6-3, 6-1 in 1h16, with a partial 10-1 from 2-3 in the first set.

The Romanian, 30 years old and 21st (it was one in 2017), recalled that dominant tennis player who amazed at the Caja Mágica, where she was a four-time finalist and two champions (2016 and 2017), and where he accumulates, with this, 29 victories, so that the Spanish WTA 1,000 is his third most successful event in that sense after the Australian Open (31) and Roland Garros (31).

Badosa, who could even lose the number three at the hands of Sakkari, complained of discomfort due to nerves and tension in the right trapezius, towards the shoulder, for which she was treated in the first break of the second round (“I’m fine”, she reassured), when she was already losing it 3-0. Her gaze was lost reddened at the sight of the abyss that separated her from Halep, a fighter she had never faced and who led the match with an expertise typical of the best Djokovic. Her changes in height and direction broke the Spanish, who kept up the pace for the first six games. The winner of two Grand Slams failed little and defended herself feline when Paula attacked.

“I knew it was going to be a tough match, Paula is very solid. I was confident that I would have my chance and I could do it well. I can’t reveal the tactic because I will face her again, but I played well,” Halep said., which presented traces of a candidate. “I don’t know if I can win the tournament, I’m going to try and do my best. I always like to play here in Madrid,” he warned. Simona, who was close to retirement due to injuries and who now has Patrick Moratoglou, ex-Serena Williams, as a coach.

Halep’s opponent in the third round will be American Cori Gauff, seeded 14th. The 18-year-old player beat the Kazakh Putintseva 6-1, 2-6, 6-4 on Saturday in the last match of the day. Curiously, It was the Romanian who embittered Coco at Wimbledon 2019, when the American surprised the world by reaching the fourth round of a Grand Slam at just 15 years old. They also met this year in Indian Wells, again with victory for Halep.

Nor the support of a large audience, which relentlessly encouraged the Catalanmanaged to lift Badosa’s spirits, overwhelmed by the pressure of being a favorite in a draw that came out poisoned for her and that she could not overcome. “I’m pretty bad. It’s tough to lose at home… It’s been a tough week too. Very stressful, with a tough draw. But I have to accept it.” Now, he needs to “rest” to face Roland Garros with enthusiasm and enthusiasm. “There are tournaments that seem to be five, and this is the case.”