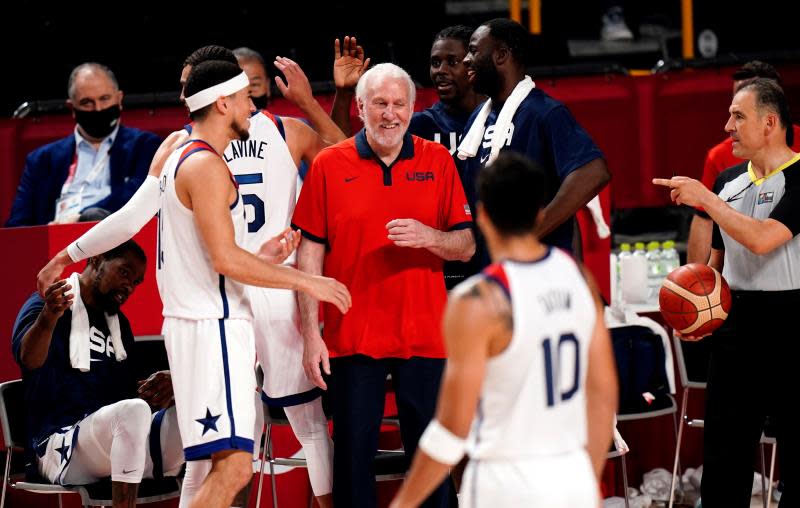 Saitama, Jul 31 (EFE) .- France and Australia closed the first phase with full victories by beating, respectively, Iran (62-79) and Germany (89-76) so they will be in the hype of the leaders of group in the quarter-final draw, a group in which the United States expects to be the best second after beating the Czech Republic by 35 points (119-84).

The French and Australians met the predictions and the French triumph left the United States with the second place at most to aspire to. The North American team, knowing that the best second will also be in the leaders’ drum, looked for a comfortable score and ended the first phase with a difference between points scored and received of 82.

He did it not without difficulties, because the Czech Republic planted a battle and kept up with him until the break (47-43), but from the third quarter, settled with a North American run of 35-17, the duel was over.

A game that had a historic record, that of Kevin Durant becoming the highest all-time scorer for the United States Olympic basketball team. His 23 points this Saturday allow him to add 354 and exceed the 336 points that Carmelo Anthony accumulated from Athens 2004 to Rio 2016.

Before the United States played in the Saitama Super Arena, France had already fulfilled its duties by defeating Iran 62-79, in a duel that broke through the fast track: at halftime they were already winning by 19 points (27-46) and he just had to manage the advantage.

The French dominance of the rebound (32-42) and a triplet success of 40% (8 hits of 20 attempts) were the ingredients that the French team, led by the new Real Madrid base Thomas Heurtel and by Timothé Luwawu-Cabarrot (12 points and 5 rebounds) took the opportunity to defeat the Persian team, where the eternal Hamed Haddadi made a ‘double-double’ of 18 points and 12 rebounds in his goodbye to the Games.

Australia also delivered on schedule by beating Germany (89-76) in a completely different match, which was not decided until the last quarter. Patty Mills (24 points and 6 assists) and Nic Kay (16 points and 4 rebounds) gave the final push to the ‘Aussie’ team to break the German resistance.

The German team, supported by Johannes Voigtmann in the inside game (7 points and 13 rebounds) and by Andreas Obst on the outside (17 points and 5 3-pointers of 12 attempts), will enter the quarterfinals by way of the two best third thirds since their Balance of -16 is much better than the -46 of the Czech Republic, practically eliminated.

In the other match of the day, Italy secured second place in Group B by defeating Nigeria 80-71, with a dominating start (29-17 in the first quarter) that was diluted to the point that the African team started the game. Last quarter with 6 points of advantage (58-64, min. 31).

Giampaolo Ricci (6 points), Simone Fontecchio (12 and 4 assists), Nicolo Melli (15 and 5 rebounds) and Achille Polonara (13 and 5) turned the situation around with a 12-0 run in five minutes that put the 70-64 in the absence of three, and there Italy did not forgive. She will be in the quarterfinals as second in the group.

Tomorrow Group C is resolved, in which Spain and Slovenia are already classified and will face each other at 17.20 hours (10.20 CET). Earlier, at 13.40 (6.40 CET), Argentina needs to beat Japan to move to the quarterfinals as one of the two best third third.

Results of the day: