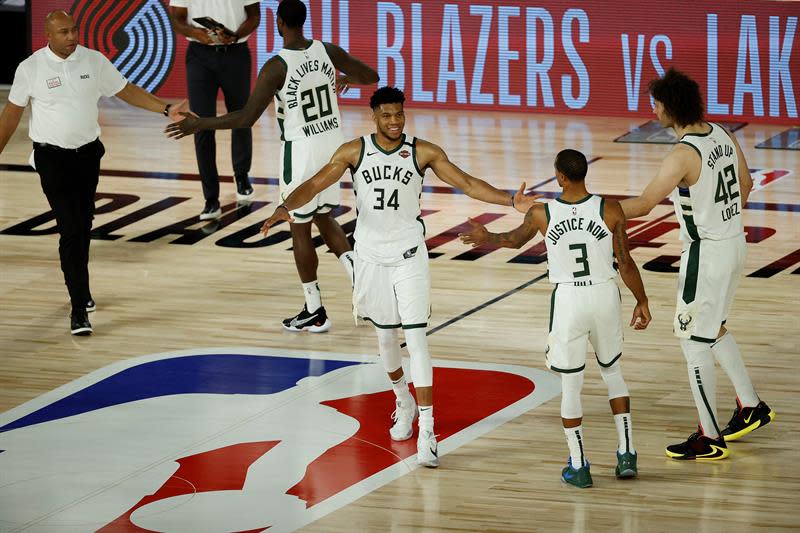 Milwakee (USA), May 22 (EFE) .- Greek power forward Giannis Antetokounmpo once again established himself as the leader of the Milwaukee Bucks by contributing a double-double of 26 points with 18 rebounds and guided them to victory in the 109-107 overtime against the Miami Heat in the opening game of the Eastern Conference first-round playoff series.

But Antetokunmpo and the Bucks had to need the decisive plays starring forward Khris Middleton and point guard Jrue Holiday in the final seconds of overtime when they scored the winning basket and put the plug that prevented the Heat’s forward Jimmy Butler, do the last triple try.

Butler, who finished as the Heat’s third-leading scorer, tied the basket at 99 when the horn sounded late in regulation and forced overtime.

The Bucks were always in control of the scoreboard, but they did not have their best shooting inspiration from outside the perimeter, leaving with only five 3s of 31 attempts to 20 of 50 of the Heat, which was what kept them in the fight.

The Milwaukee team had never made fewer than seven 3s in a game during the regular season.

But in the end Middleton with 27 points, including the winning basket, six rebounds and six assists, along with Holiday, who also contributed a double-double of 20 points, 11 rebounds, three assists and three steals made the difference in favor of the Bucks.

Despite his decisive contribution, Antetokounmpo scored just 6 of 13 on free throws. During the last 1:06 of regulation time, Antetokounmpo was 2-for-5 from the line and had a 10-second violation that prevented him from getting another free throw attempt that would have ensured his team victory.

The Cuban American center Brook López with 18 points and eight rebounds completed the list of the four Bucks players who had double-digit numbers and were placed with a 1-0 advantage in the series that they will play in the best of seven games. .

Holiday scored an unusual basket late in the second quarter. It looked as if Holiday was attempting an assist to Antetokounmpo, but the ball went through the hoop.

The Bucks are making their fifth straight playoff appearance to match the second-longest streak in team history. They made the postseason 12 consecutive times between 1980 and 1991.

The veteran Slovenian point guard Goran Dragic, who came out of reserve, finished as the Heat leader by contributing 25 points, including five triples, the last one he achieved with 20.6 seconds left of overtime that put 107 on the scoreboard.

Guard-forward Duncan Robinson with another 24 points, including seven 3-pointers from 10 attempts, was the Heat’s second leading scorer and Butler finished with a double-double of 17 points, 10 rebounds, eight assists, two ball recoveries and another six losses.

While the All-Star center of the Heat, Bam Adebayo served under the hoops with 12 rebounds, but only scored nine points after missing 11 of 15 shots from the field.

This game featured the most attendance for a Milwaukee home game this season.

Revised coronavirus pandemic guidelines imposed by the Milwaukee Health Department allowed the Bucks to fill 50% of the Fiserv Forum seats this season, resulting in an attendance of around 9,000 fans.

The Bucks had closed the regular season by playing home games at 18% capacity, or about 3,300 people.

Game fan attendance will increase even more when this series moves to Miami for the third of the series to be played after the second in Milwaukee on Monday.

The Heat announced Saturday that they could have as many as 17,000 fans in their playoff games on their field at American Airlines Arena.