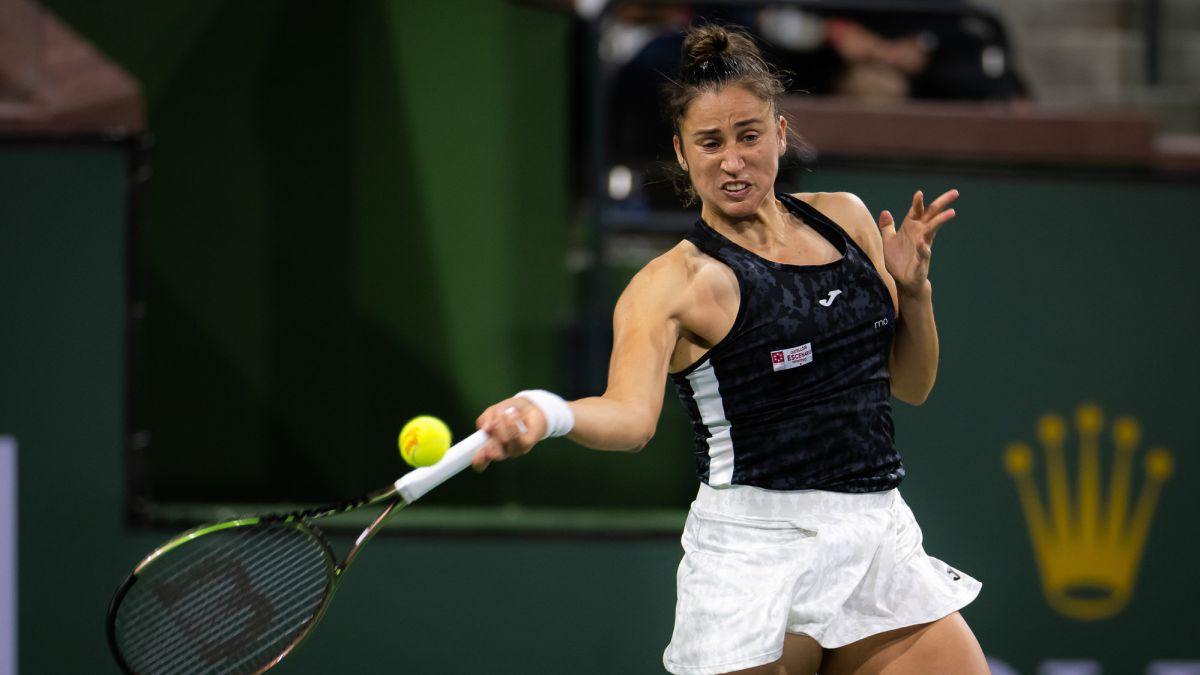 Patience, which has given so many triumphs in her career to Sara Sorribes, quarterfinalist in Miami last yeardid not serve this time to contain the aggressive blows of Kaia Kanepi, the 36-year-old veteran who has an enviable physical condition and who came from behind to win by 3-6, 7-5 and 6-0 in 2h47. The Estonian, who on her day was number 15 in the world (now she is 61st) and has won four tournaments in her career, imposed her experience and will face Tunisian Ons Jabeur in the third roundeighth favourite, who defeated Poland’s Linette (7-6 (1) and 6-2).

Sorribes, one of the players with the best physique on the circuit, collapsed because of the effort she had to make to defend Kanepi’s sticks and although her variation tactic, sliced ​​backhand and high balls worked for her in the first set, her rival was in tune in the second, which she knew how to pull off after seeing how the Spanish matched a 3-0 start.

The third was dominated at will by Kaia, which added to its power an effectiveness that it had not had in the first hour and a half of the match. From there came a donut that perhaps Sara did not deserve, who had won her in her only previous confrontation, a good memory for her because it was her first victory in a Grand Slam, at the start of Wimbledon 2018. Sorribes is already looking forward to the clay court season.

Raducanu is still in free fall

Emma Raducanu, current US Open champion, has not digested well the success that came to her by surprise at the age of just 19, when she beat another teenager, the Canadian Leylah Fernández, in the New York final. Since then, the Briton has won just four of the 12 matches she has played. This Thursday she lost in the Miami central against the Czech Siniakova, an excellent doubles player who linked eight defeats against the top-20 in singles and came back to win 3-6, 6-4 and 7-5 in 2h55. It is the fifth time that Raducanu has fallen to the first exchange in a tournament since September 2021. It must be remembered that at the same time last year, Emma fell below 300th place in the classification and is now 13th.

By the way, Fernandez did not do well on the day either, who succumbed against another Czech, Muchova (6-4 and 7-6 (3)), who had not played due to an abdominal injury precisely since the first round of the last US Open, when he lost to Sorribes. Another favorite that is also in the doldrums is Elina Svitolin. The Ukrainian, seeded 15th, crashed against the British Heather Watson (4-6, 6-3 and 7-6 (4)). He has not won more than two games in a row since the North American event, which has become cursed for some tennis players. Another example is that of Karolina Pliskova, quarterfinalist in that event and downhill since then between injuries and poor results. In Miami, she fell in her debut against Russia’s Kalinskaya (double 6-3).

🇯🇵 @naomiosaka defeats Kerber in an hour and sets up a third-round clash with Muchova!#MiamiOpen pic.twitter.com/Dglp568tlP

Naomi Osaka is already in the third round of the Miami Open after defeating Angelique Kerber with authority (6-2 and 6-3). The Japanese, former number one and currently 77th in the ranking, had fallen four times in five duels against the German. In fact, only she and Simona Halep, who is low in the tournament, have managed to win it at least four times. “Last time we played I wasn’t good to return, this time I attacked his second serves well,” said Osaka, who hadn’t beaten a top-20 player for precisely a year at the Florida tournament, will face Muchova on Saturday. . Danielle Collins, finalist of the Australian Open and last rival in Ashleigh Barty’s career, was able to defeat the Hungarian Bondar with some difficulties (6-3, 3-6 and 6-4) and it will be seen with Zvonareva or Zidansek.