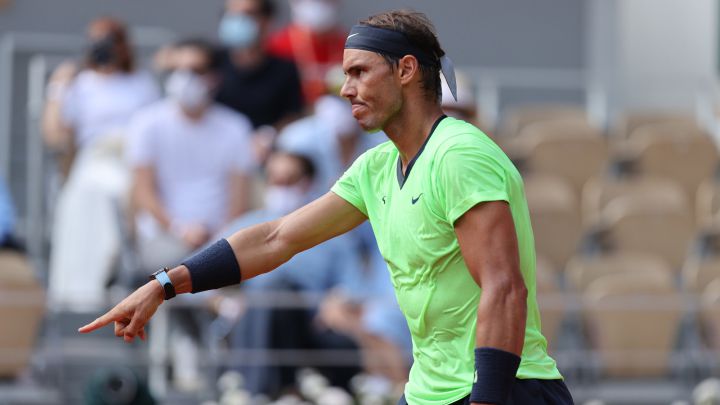 After beating Diego Schwartzman in four sets and entering the semi-finals at Roland Garros for the 14th time, Rafa Nadal addressed the media by telematic means to convey their feelings about the game and about what lies ahead.

More viewers: “We have to get used to playing with the public again. These fantastic noises when you are a lot without listening to them, sometimes they catch you suddenly, but I think this energy that people transmit to you makes the games live with a higher emotion.”

Confidence: “If I don’t play well, there is nothing to do even if I am confident. Here I play well more often than in other places, and yet I have been in a difficult situation. Then I recovered and started to serve better in the third set. I can’t pretend to get here and think about not losing sets. It’s part of the game and it doesn’t have to be a disaster. I fully accept it as I have in my entire career. What matters is how you get back after losing one. “

Moyá gesture: “I’m in my world in there. I have found the calm to hit as I have in training, because I was hitting short. I had to find my best level with that feeling of tranquility, with a long harmonic gesture, that does not get dirty. I had the calm to come out of a pressure situation well, with a clear determination. And it has gone well. “

When you nail the interview 💪#Roland Garros | @Rafael Nadal pic.twitter.com/DPYaoL6fKR

Djokovic: “If that’s the case, we know each other well. Everyone knows that anything can happen and whoever plays better has more chances of winning. But it’s a semi-final, not a final, so whoever wins later has to repeat. in the final. You need to play your best tennis, if you do what you must, you will have options. It is a great challenge and something good because it is what you play for, on the other hand, it is very difficult. I prefer it in the final, because it would already be in the final. It’s the bloody truth. If I win, fine, if not, home. I need my best level in the semifinals. “

Playing against him, the biggest challenge: “I am not the one who should speak about me. I cannot hide that I have amazing numbers at Roland Garros. It is an honor for me that the commentators think that of me, but I should not think about that.”

2013 Semifinals: “It was dramatic, there was everything, it was a very exciting game, with a very high level. The difference from a final to a semifinal is everything. In a final you have no more games left. If you win a semifinal, you are happy, but you haven’t I have won nothing yet. I face all the games with the same mentality. The finals are more special, but this time it may be in the semifinals because I am number three and I have two players above me. Berrettini is having a great season. “

Schwartzman and his thorn nailed before Nadal

The applause of Philippe Chatrier could not mitigate her enormous disappointment. Argentine Diego Schwartzman, world number 10, lamented the way in which he was eliminated at the hands of Rafa Nadal, whom he cornered in moments of the match: “Every time I went far at Roland Garros I always lost with Rafa.” Quarter-finals in 2018, semi-finals in 2020 and quarter-finals in 2021. The same executioner. This last time, however, the 1.70 meter tennis player cornered Nadal, in a game that in some phases was reminiscent of 2018, when he also stole a sleeve from the Spanish, a real event.

“El Peque” gave up 6-3, 4-6, 6-4 and 6-0 in 2 hours and 45 minutes. In that second set he made the 13-time Roland Garros champion bite the dust, but from the end of the third set the tone changed and the Spaniard took the roller. “In the fourth, he went to the bathroom and after the break it was difficult for me to come back. Then it was a horn, I couldn’t do anything. He made me more than 10 winning shots in the fourth set,” he recalled. “It’s a shame to finish the fourth set like this,” he added, “because of how I had played all the rest. It hurt a little; I hope that in the future I can be on the other side of the table, because when I win matches in powder I become very strong, I know that the others do not want to play against me at five, “he analyzed. Schwartzman’s bitterness runs deep. Due to its physical and technical characteristics, clay is clearly your ideal surface. In which you can develop all your aggressive tennis, long exchanges, in which you have more options to subtract effectively. Nadal always cuts his wings.

“Of the 12 times we played, 6 or 7 times, even the one I beat him (in 2020 in Rome), they were very even. But he ends up winning. Being close or not is also a defeat. Better to do well against someone like Rafa, but I can’t find a way to escape, to win it. That hurts, “he said. The road in this Roland Garros was impeccable until he met the Spanish. Four victories without giving up a set. First was the Taiwanese Lu Yen-Hsun (680 in the world who entered with a protected ranking); in the second round , the Slovenian Aljaz Bedene (n.56), in third, the German Kohlschreiber (n.132); and in eighths the also Teuton Jan-Lennard Struff (n.42). “10 days ago I had the objective of winning a match, I could not imagine the quarterfinals without losing a set. I needed a tournament like that, play well, feel good, chain matches in a tournament. It will serve for the future.”, he concluded. Schwartzman was the last Argentine representative of the individual tables at Roland Garros. Nadia Podoroska, who is paired with Romanian Irina-Camelia Begu in the women’s doubles, is now the last surviving albiceleste.

Last year’s individual semifinalist did not pass in this edition of the first round, but in the double she is being one of the sensations. They beat the pair formed by the Croatian Petra Martic and the British Shelby Rogers, 6-3, 4-6 and 6-2 and now they will meet for a place in the final against the Polish Iga Swiatek, winner of the individual tournament last year and eliminated this year, and American Bethanie Mattek-Sands. In any case, Schwartzman, at 28, has established himself in the history of Argentine tennis. He has equaled the marks at Roland Garros of Guillermo Cañas and Del Potro, with three appearances in the quarterfinals, still far away the 9 of Guillermo Vilas. And he surpasses Guillermo Coria by reaching a quarter for the fifth time in a great. Vilas, with 19, Del Potro, with 13, and David Nalbandian, with 10, are still ahead. —EFE