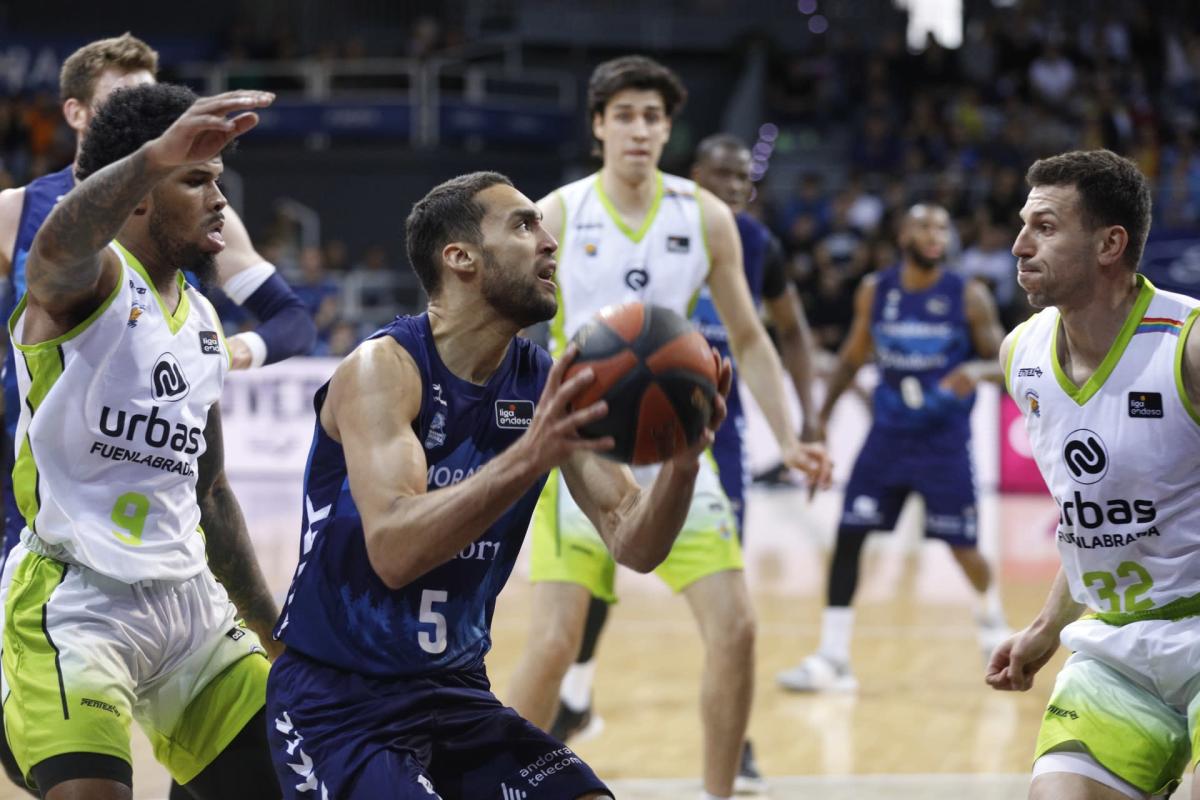 Andorra La Vella, May 7 (EFE) .- Codi Miller-McIntyre, American shooting guard for MoraBanc Andorra, fueled the Principality club’s dream of permanence by scoring 25 points, capturing 5 rebounds and dishing out 9 assists, with a PIR of 32 , to lead his team’s 92-84 win against Urbas Fuenlabrada.

It was a golden victory for Óscar Quintana’s team, although Josep Maria Raventós’s team saved the average with a good performance by Dusan Ristic, who had 21 points, 9 rebounds and a PIR of 30.

Much at stake and maximum intensity. MoraBanc Andorra and Urbas Fuenlabrada played an unreserved start to the match. From the initial 4-0 they went on to a 0-10 run for Josep Maria Raventós’ men.

The entrance of TJ Cline by Nacho Llovet served MoraBanc to wake up and get their first points in play after six minutes of the game. Óscar Quintana’s partial was 10-2 with six points from the former Maccabi Tel Aviv power forward. With the score at 14-12, Raventós called time-out and his team reacted to win the first quarter with a three-pointer at the buzzer by Argentine Juan Fernández (19-20). The visitors went 4-for-9 from three-point range in the first 10 minutes.

Óscar Quintana’s men gritted their teeth in defense although the success from the 6.75 line and the inspiration of Dusan Ristic led the visitors to win by three points (26-29). A 9-2 run activated the Principality with a triple by Jelínek and two by Codi Miller-McIntyre for 35-30 at 5:13 of the break.

From then on, the locals went wild in attack, always supported by a great defense. The partial became 22-8 and the electronic gave MoraBanc some peace of mind with 48-37. Miller-McIntyre stood out in this quarter with 10 points. At halftime, Clevin Hannah, with one inning, closed the second quarter with a 50-39 and with about 10 minutes in which Miller-McIntyre stood out, who went to the locker room with 13 points, 4 rebounds, 4 assists and 17 of assessment.

After the break, a 5-13 run for Urbas Fuenlabrada brought Josep Maria Raventós’ men closer to three points (55-52) with five minutes remaining in the third quarter. Óscar Quintana’s men were gripped in attack and only a triple by TJ Cline and another by Hannah helped them stay ahead on the scoreboard at 61-54.

On behalf of Urbas Fuenlabrada, Dusan Ristic, with 16 points, was being a real nightmare for the locals. The one who was not there to undergo relaxation was Miller-McIntyre. The North American shooting guard led an 8-2 run with six consecutive points at 1.53 to make it 69-58.

Cheatham again brought the visitors closer with five consecutive points (69-63), but a triple by Miller-McIntyre closed the third quarter with a 72-63. The North American already had 22 points and a PIR of 28.

In the last quarter, MoraBanc continued to chip away at a rival who heavily influenced the individual actions of Lamar Peters. At 6.00 from the end, Óscar Quintana’s men achieved a +11 (80-69). Miller-McIntyre was able to match the average, but he missed a solo tackle after stealing the ball and the same thing happened to Clevin Hannah.

Anxiety was beginning to set in and on the other side Lamar Peters continued with his successful individual actions. The distance remained at 10 points at 3.24 to go until a triple by ‘Obi’ Emegano (81 to 74).

A 2+1 from Novak made it 85-79. Even so, a triple by Hannah at 1.22 (88-79) made the locals dream of overcoming the average. A 2+1 from Ristic broke that option, but MoraBanc managed to equal Urbas Fuenlabrada in wins and losses in the fight for permanence.

Incidents: Match corresponding to matchday 32 of the Endesa League played at the Andorra Sports Center with 4,114 spectators.