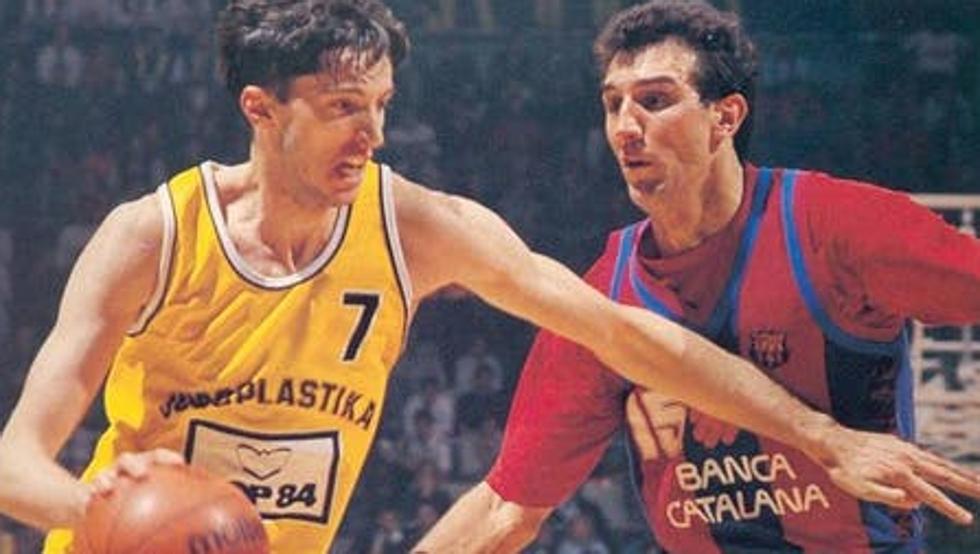 The European cup basketball (current Euroleague) adopted the Final Four format, with the two semifinals at the same venue, played over a weekend, from Friday to Sunday; on the 1987/88 season.

But it was not until the next, in 18988/89, that the FC Barcelona basketball played his first F4. Since then, the Barça team has played up to 14 Final Four, with the most disparate results:

The Barça arrived at this appointment next to Maccabi Tel-Aviv, Aris Thessaloniki Y Jugoplastika from Split. Those of Aíto García-Reneses they faced the Yugoslav team in ‘semis’, before which they fell 77-87.

Touched by the unexpected defeat in the first game, the Catalans also clearly lost to him Aris in the match for third and fourth place (88-71).

A year later, the Barça came to Saragossa with the favorite band: he played at ‘home’ and the Jugoplastika he was no longer an unknown rival.

In the semifinals he easily got rid of the Aris from Thessaloniki (104-83), but in the final against the Croats (although at that time they were still Yugoslavs), after signing some good first minutes, they ended up losing again to the Kukoc, Radja, Perasovic, Savic and company (72-67).

Again, a brilliant semifinal: 101-67 against him Maccabi Tel-Aviv, but with an unexpected mishap: the Audie Norris shoulder injury, key player in the schemes of the Barcelona team.

In the final, the American center couldn’t move his arm and even threw a few shots with his left hand. Still, those of Bozidar Maljkovic (signed from Jugoplastika, precisely to get the European Cup) were in the game and only fell by a tight 70-65.

After a couple of years of absence, the Barça returns to a Final Four in Tel Aviv. With many doubts in the team, the Catalans do not exceed the ‘semis’ against another Catalan team, the 7up Joventut de Badalona (65-79), who would later be proclaimed champion of Europe by defeating the Olympiacos in the final by a tight 59-57.

Barça, meanwhile, completed a disastrous weekend with a wide defeat against Panathinaikos (83-100) in the ranking for third and fourth place.

Like five years before, the Barça He was returning to the French capital with the intention of winning his first European Cup.

In the semifinals, he eliminated a Real Madrid (76-66) with whom he had already seen faces in the group stage and started as a favorite in the grand final against Panathinaikos.

After finding themselves far behind on the scoreboard during the second half, the Barça team staged a spectacular comeback in the last minutes of the game, reaching a single point.

But if this final has gone down in history (black in the case of FC Barcelona) it is because of the controversial last play: with 67-66 on the scoreboard, Vranjkovic put an illegal stopper on the azulgrana Huntsman having already touched the ball on the board.

The referees did not see it and Barça lost their fourth final of the highest continental competition.

And the following year, the fifth loss in five finals. In Italian lands, the Catalans defeated the ASVEL French (77-70) in the semifinals, but in the final against Olympiacos (73-58) they encountered a David rivers sublime that did not give any type of option to victory.

After starring in some brilliant first phase (they finished first in group A, with a balance of 9-1) and also in the second (1st in group E, with 12-4), Barça reached the Final Four after leaving out Ülker in the Top16 and at Olympia of Ljubjana In rooms.

But arrived in Hellenic lands, the disappointment: defeat without palliative before the Maccabi Tel-Aviv (51-65) in the semifinals and against Efes Pilsen (69-75) in the match for third and fourth place.

And on the eighth … Champions! After seven appearances in the Final Four and five lost finals (all those that had played), FC Barcelona finally won his first European Cup (in this case, already Euroleague).

It had to be in front of his audience (with a packed Palau Sant Jordi), with a truly luxurious squad (Bodiroga, Jasikevicius, Fucka, Navarrese, …) and a real teacher on the bench (Svetislav Pesic), but, finally, he got the long-awaited title.

In the semifinals he defeated CSKA Moscow (76-71) and in the grand final he did the same against the Bennetton from Treviso (76-65) from Edney, Langdon, Garbajosa, Pittis and Nicola, with Messina on the bench.

Without a doubt, an F4 to remember.

After the joy of Barcelona in 2003 … the absolute disappointment in Prague in the next Barça appearance in a Final Four.

Two games, two defeats: 75-84 in the ‘semis’ against him CSKA Moscow and 82-87 in front of TAU Baskonia in the match for third and fourth place.

Barça began to build what the following year would become a champion team, but the appointment of Berlin it came to him perhaps too soon.

In ‘semis’ he fell to a great CSKA by a tight 78-82, but in the consolation match he did show his best version against Olympiacos (95-79).

Along with that of Barcelona in 2003, another Final Four for the memory of Barça fans. At the third time it was, finally, the charm for Barça in Paris.

In the semifinals they gave a good account of their magnificent defense, beating the CSKA of Moscow by 64-54, but those of Xavi Pascual they had saved the best for the grand finale.

Before a Olympiacos formed out of millions, with cracks like Teodosic, Kleiza, Childress or Schotsanitis, Barça played the best basketball that has been seen in many years.

The final was dominated by the FC Barcelona from the start of the match and the final 86-68 does not fully reflect the incredible Catalan superiority.

Juan Carlos Navarro It was choosen Mvp of the F4, but we must not forget the great level shown by Mickeal, Ricky Rubio, Lorbek, N’Dong, Fran Vázquez and company.

The second Euroleague could already shine in the showcases of Barça.

After missing the 2011 appointment, Barça’s return to the Final Four was not the best: they fell in the ‘semis’ by a tight 64-68 against Olympiacos, but knew how to recover to leave Ottoman lands with a bittersweet third place, after a victory against Panathinaikos by 74-69.

A year later things were even worse: defeat in ‘semis’ against his historical rival, the Real Madrid, by 67-74 and by a very tight 73-74 in the match for third and fourth place against the CSKA Moscow.

Without a doubt, a Final Four of dire memory for Barça. Despite finishing in third position after easily winning at CSKA Moscow (93-78) in the consolation match, the Milan appointment is remembered by the tremendous beating that Real Madrid endorsed the Catalans in the semifinals: a 62-100 without palliative.

Hopefully in this 2021, in Cologne, things will go much better for FC Barcelona in Saras jasikevicius.