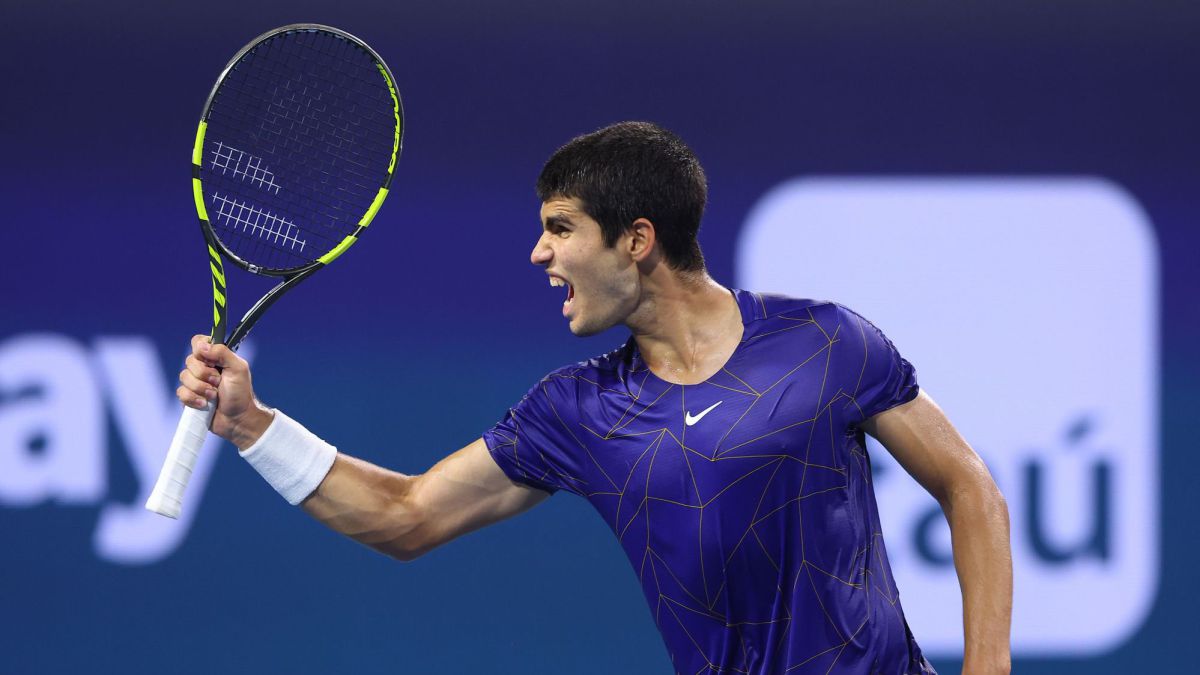 Almost exactly a year ago, Carlos Alcaraz beat Norwegian Casper Rudd at the Andalusian Open. On Sunday, they will meet again, but this time in the Miami Open final. This time, like then, the Spanish tennis player will use the maxim that his grandfather taught him. “He has always told me to focus on the three ‘C’s: Head, heart and balls,” Alcaraz said. to the press an hour after he became the fifth-youngest finalist in a Masters 1,000 tournament in ATP history this Friday at the Miami Open.

The 18-year-old Spaniard defeated Pole Hubert Hurkacz, the 2021 champion, in straight sets, who attributed his elimination to “Carlos playing too well.” It is not the only thing that has made him one of the most admired new tennis players on the circuit and he is clear about it. “Everything I have achieved is thanks and for him,” he said in reference to his coach Juan Carlos Ferrero, who for the first time has not been able to be by his side after the loss of his father Eduardo on March 20. “He is always with me even if he is not here,” he said, revealing that he is in constant contact with Ferrero. But, in addition, he has felt “very sheltered” in Miami. “The public has been too generous. My father is also with me, three of my uncles have come, a lot of people, I have a lot of people around,” he explained.

Routine before the semifinal

His routine before the semifinal match included a nap of about 20 minutes, from which he woke up two hours before the date on the court. Then a game session with his mobile phone and a while joking with his circle of trust. He is convinced that he does not have to “think about anything” that adds pressure, more so this Sunday. That includes thinking about the possibility of ending the losing streak of the Spaniards in the men’s final of the Miami Open, who have failed eight times in their fight for the championship.

And it is that Alcaraz is trying that the final confrontation on the court against Rudd, the first Norwegian in a Masters 1,000 final, does not threaten his mental stability. “I’m trying to see Sunday’s game like any other,” he said. His very clear goal: “have fun and do the best I can.” When he thinks that on April 10, 2021 he beat Rudd in Spain, Carlos Alcaraz smiles. “I feel like a much better player now. Sure, he is too, but we know each other on the court and that helps.” It will also help to have nearly 100% of the crowd in the stands at Hard Rock Stadium cheering every success, holding their breath at every tricky play and shouting his name even after mistakes or lost points.