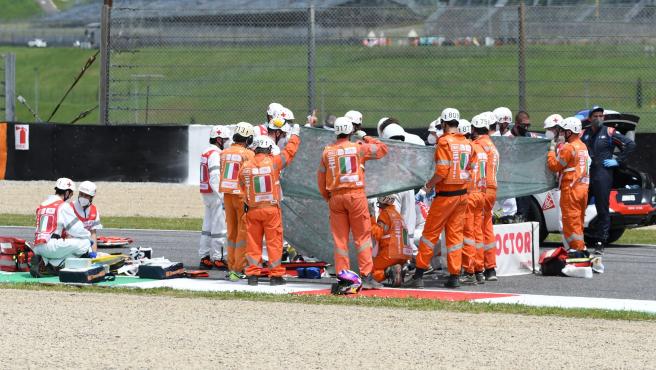 Motorsports are dangerous. This maxim appears on the passes and tickets of many motoring and motorcycle competitions, such as the World Championships. Formula 1 Y MotoGP. It is a warning to the spectators who will see the races on the circuits: they may witness the death of pilots or they may even have some serious mishap themselves (see what happened in Le Mans in 1955 or in Montjuic in 1975).

Last weekend there was the last example. The Swiss pilot Jason dupasquier, only 19 years old, lost his life as a result of injuries that occurred in the fall during Moto3 qualifying at the Italian GP, ​​when a rival ran over him. An incident that could be seen several times on television, with repetitions and details.

This factor has been criticized during the paddock. The border between information and curiosity it is very fine in these cases. In addition to live broadcasting, from the platform’s social networks DAZN, which broadcasts the competition in Spain (and other countries), the video was shared at first, although then he deleted it. It was late, because it was already circulating on the networks and is currently easily accessible.

It is very hard for drivers to see over and over again on the circuit screens how a teammate and rival suffer a fatal fall. Jack Miller, Ducati rider in the premier class of MotoGP, has been the last to raise his voice about it. “Last night (on Saturday) I was having dinner at the motorhome and we had Sky TV on, and I had all the televisions turned off because in the end I think I saw 10 fucking reruns of the accident“He criticized.” This is the most unacceptable of all, you don’t know what’s going on, “the Australian exploded, in statements to Motorsport.com.

At that time, Dupasquier was being intervened to life or death, although many pilots and paddock members already anticipated that it would have a fatal outcome. Some as Brad binder, they see to some extent justifiable and useful that televisions recreate themselves in accidents. “If you see any movement of the victim, it reassures you. But it is what it is,” he admits.

Formula 1 has already raised its voice over a similar event recently: Romain Grosjean’s serious accident at the Bahrain GP. Daniel Ricciardo He harshly criticized the televisions, since they were watching over and over again how the Frenchman’s car crashed and burst into flames. In this case there were no victims to mourn and Grosjean came out reasonably unscathed of such an incident, but at any moment something like this could happen.