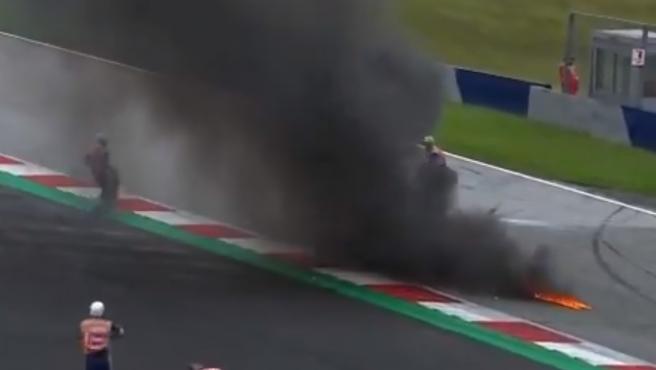 The Styrian GP MotoGP was interrupted in its first laps after a spectacular, although luckily not serious, accident between Lorenzo Savadori Y Dani Pedrosa.

The Catalan rider, who returned to action this weekend after obtaining a ‘wild card’ with KTM, went to the ground in the early stages of the race due to track conditions. The rain during the morning had already caused the Moto3 and Moto2 races to be contested with the wet track, although the MotoGP race was declared dry.

As soon as Pedrosa went off the track and stepped outside, he crashed after losing control of his bike. Bad luck made Lorenzo Savadori, who was behind, run over the Spaniard’s KTM, causing a crash. When all the pilots were out, the Italian’s mount caught fire, leaving a large black smoke.

🚩 RED FLAG! Tremendous fire on Lorenzo Savadori’s motorcycle after an incident with Pedrosa! 🔥😱

The image is tremendous! 🔥🔥

What a fire we have experienced in the Red Bull Ring after the accident with Pedrosa and Savadori as the protagonists. That awful!#StyrianGP 🇦🇹 #MotoGP 🏁 pic.twitter.com/kOxvXs0OYv

Obviously the red flag was raised and the test was paralyzed for a few minutes until the incident was cleaned up.