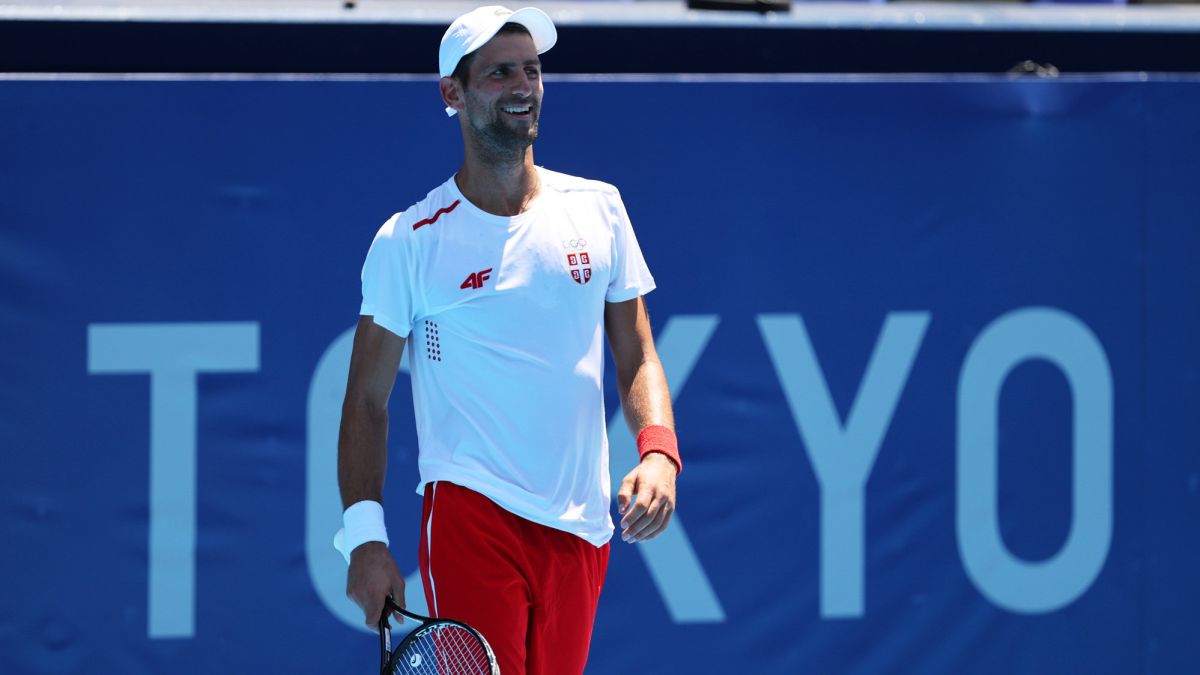 The number one in world tennis, Serbian Novak Djokovic, will debut at the Tokyo Olympics against Bolivian Hugo Dellien, 139 in the ATP rankings, and could be found in his way to the final with Seventh-seeded Russian Andrey Rublev in the quarterfinals and German Alexander Zverev, fifth favorite, in the semifinals.

Djokovic has won the first three Grand Slam tournaments this season, Australia, Roland Garros and Wimbledon, so if he takes gold in Tokyo and later with the Australian Open he would become the first man to obtain the so-called ‘Golden Slam’.

On their side of the table, according to the draw carried out today in Tokyo, the Spanish also appear Alejandro Davidovich (16), who will debut against the Portuguese Pedro Sousa and meet the Serbian in the third round; and Roberto Carballés, who will open competition against Georgian Nikoloz Basilashvili and he would not meet Djokovic until a hypothetical semi-final.

The Polish Hubert Hurkacz, seventh seed and semi-finalist at the last Wimbledon, could also star in a semi-final with Djokovic.

The second seed, Russian Daniil Medvedev, will start against Kazakh Alexander Bublik and on his way to the final he could find himself in the quarterfinals with Spanish Pablo Carreño, sixth favorite and that will be released against the American Tennys Sandgren.

Greek third-seeded Stefanos Tsitsipas will start against German Philip Kohlschreiber and would be Medvedev’s rival in the semifinals.

The Argentine Diego Schwartzman (8), with the Peruvian Diego Varillas, have also fallen in this half of the table. as the first rival; the Spanish Pablo Andújar, with Ugo Humbert as the initial opponent; and double Olympic champion (2012 and 2016) Andy Murray.

The Briton, currently ranked 104th in the ATP but back on the circuit after his ordeal of injuries, will start the Olympic tournament against Canadian Felix Auger-Aliassime (9), who has in his technical team the Spanish Toni Nadal, Rafael Nadal’s uncle and former coach, who does not play in Tokyo.

The tournament will begin on the 24th on the fast surface tracks of the Ariake Park in the Japanese capital.

Muguruza could be seen with Barty, who will debut against Sorribes

The Australian Ashleigh Barty, number one in the world, will face the Spanish Sara Sorribes in the first round of the tennis tournament of the Olympic Games, that was drawn today and that produced a comfortable rival, the Chinese Saisai Zheng, for the local fan favorite and second seed, Japan’s Naomi Osaka.

If she beats Sorribes, with whom she has never played, Barty could meet Russia’s Anastasia Pavlyuchenkova in the third round., finalist of the last Roland Garros; in the quarterfinals with the Czech Barbora Krejcikova, winner of the Parisian tournament; yen semifinals with Belarusian Aryna Sabalenka, third favorite, or with Spanish Garbiñe Muguruza, seventh seed.

Muguruza will make her debut against Russian Veronika Kudermetova, whom she has already beaten twice, the last this year in Doha. The next rival of the Spanish would come out of the cross between the Paraguayan Verónica Cepede and the Chinese Qiang Wang.

Naomi Osaka, second seeded and returning to the tracks in Tokyo after a seven-week voluntary absence, will start against Zheng, to which she has prevailed in the last two of her three meetings, and her possible rival in the semifinals would be the Czech Karolina Pliskova, finalist of the last Wimbledon.

The Spanish Paula Badosa, with the French Kristina Mladenovic as the first opponent, and Carla Suárez, who will debut against the Tunisian Ons Jabeur; Ukraine’s Elina Svitolina, fourth seeded; and the American Jennifer Brady, who lost to Osaka in the final of the last Australian Open, share half the table with the Japanese.

So does the Polish Iga Swiatek, sixth seed and winner of Roland Garros in 2020.

The tournament begins on the 24th at Ariake Park in Tokyo.