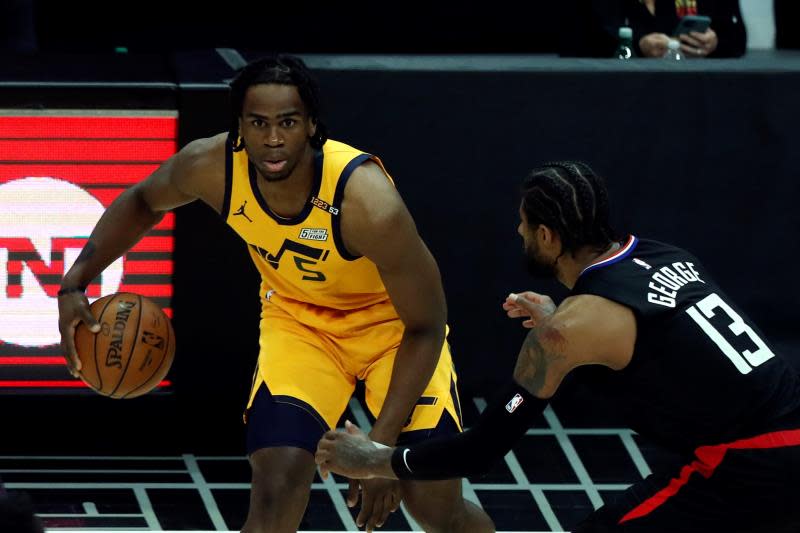 The Los Angeles team did not leave their homework until the last minute and crushed the Jazz in a marvelous first half (68-44) with an overwhelming attack (50% from the field and three shots).

The Jazz tried to rearm themselves after the break, but the mountain they had to climb was too high and this time they had neither the strength nor the inspiration they needed.

In the end they ‘made up’ the result of a match in which they were inferior for much of the evening.

A Kawhi Leonard going through an extraordinary moment (31 points, 7 rebounds and 3 assists) and a decisive and concentrated Paul George (31 points, 9 rebounds and 4 assists) were joined this time by Marcus Morris, exceptional with 24 points and 5 of 6 in triples.

The low starting five was once again key for the Angelenos, who after winning their two home games in a row now travel to Utah (USA) with their options intact.

For the Jazz, Donovan Mitchell was again the most outstanding (37 points, 5 rebounds and 5 assists), but he again looked too lonely especially in a first half in which the Utah team threw the game away.

Point guard Mike Conley missed his fourth straight game in the Jazz, although the image of the night was that of a wild dunk by Kawhi Leonard on Derrick Favors that will be seen these days on televisions around the planet.

A Bojan Bogdanovic dunk right at the start of the duel seemed like a good omen for the Jazz, but in reality it was the opposite.

Kawhi Leonard and Marcus Morris responded with two triples to launch a great opening offense that forced a visiting timeout when the game had barely started (10-2 with 9.48 left).

The Jazz boast of having one of the most agile and precise circulations in the NBA, but tonight they got stuck before the defense of the low quintet of their opponents.

In addition, the Clippers coldly and mercilessly punished every fumble and blunder in defense of the Jazz.

Paul George, again incisive in attack, and Marcus Morris (3 of 3 in triples for 11 points), joined a forceful Kawhi Leonard, who with 12 points led a magnificent first quarter of the Clippers (30-13) against some inoperative and rusty Jazz.

The locals did not slow down, who with a triple by Luke Kennard reached a 20-point lead at the beginning of the second quarter in a surprising and fair way.

With no news of Donovan Mitchell until then (only 4 points in the first quarter), the Jazz also did not find answers on a bench without spark and also saw that the reserves of their rivals, such as the impetuous Terance Mann, were joining the party from absolutely thrown Clippers (41-17 with 8.14 left).

Intensity to protect the rim, ability to run the counterattack, good defensive aids, intelligent movement of the ball, hit from the perimeter …

The Clippers dominated every aspect of the game against a bland Jazz who trailed by nearly 30 points midway through the second quarter.

The bad news was accumulating for the visitors, since in addition to dealing with an aggressive and brilliant version of George, who lifted his entire fans with a dunk, he also saw Rudy Gobert go to the bench with his third foul in the middle of the game. second partial.

However, out of nowhere Mitchell emerged once more, who, seen and unseen, managed to finish the first half with 21 points and thus avoid the total collapse of the Jazz (68-44).

However, the visitors’ star had to witness before intermission an impressive dunk by Kawhi Leonard on Derrick Favors that will undoubtedly appear among the most spectacular plays of these playoffs.

Perhaps confident by the unbeatable sensations with which they had gone to the locker room, the Clippers were surprised by a Jazz hurt in pride.

Mitchell once again led the offense of a Jazz that, for the first time all evening, looked somewhat like the team that achieved the best record in the NBA in the regular season (52 wins and 20 losses).

The Utah team came within just 14 points (75-61 with 7.08 left), but the Clippers gritted their teeth and with George to the rescue they controlled the situation (84-64 with 4.12 remaining).

Tireless Mitchell pushed the Jazz forward time and time again, yet they stumbled on silly mistakes and lacked that special point of luck that is essential for a major comeback.

At the end of the penultimate quarter, a pat from Ivica Zubac left almost nothing in the rebellion attempt of the Jazz (94-73).

The final quarter seemed to have very little history, but the Jazz gave it excitement by getting within 10 points (112-102) with 2.10 remaining.

However, the Clippers, perhaps too relaxed in the final stretch, certified the triumph of George’s hand.

The series now returns to Salt Lake City (USA), where the fifth match will be played on Wednesday.